Named for its founder, meat-packing baron Michael Cudahy, who purchased the land known as Rancho San Antonio in 1908 for development. Cudahy was incorporated in November 10, 1960 and situated in Southeast Los Angeles next to the LA River and 710 Freeway, Cudahy is both a small city and part of a large metropolis. It boasts a unique name and a colorful only-in-California history.

It was in 1810 when the King of Spain rewarded his former cavalry corporal, Don Antonio Maria Lugo, with eleven square league of California. In 1813, Don Antonio Maria Lugo settled on an area that extended from the low range of hills which separated it from the San Gabriel Valley to the Old Dominguez Rancho at its south, and from the eastern boundary of the Pueblo to the San Gabriel River. 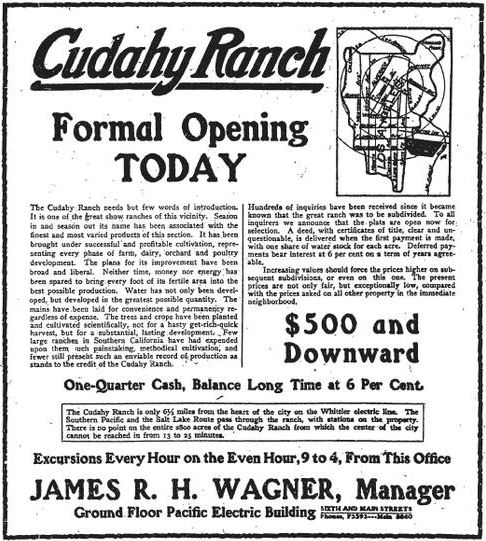 This was a huge land holding approximately 29,513 acres. The huge ranchos of San Antonio, Chino, San Bernardino and Cucamonga became the properties of Antonio Lugo.

In 1855, Rancho San Antonio was partitioned and sold. San Antonio kept approximately one-seventh of the ranch, 4,239 acres. The old grandee lived on seven acres of his land, the Lugo Ranch, three miles east of Bell. Don Antonio Maria Lugo rode tall in the saddle until he was past ninety years old. He was a familiar sight. Don Antonio died in 1860. The total 4,239 acres were deeded to Vincent Lugo.

In 1862, the Los Angles and the San Gabriel Rivers overflowed. To compound the problem, the years of 1863-64 were years of drought. Like so many large Spanish land owners, Vincent Lugo was forced to relinquish his title to the land.

In May of 1864, Isaac Heyman foreclosed a mortgage on Vincent Lugo’s 4,239-acre tract. The tract was sold at public auction by order of the court for 95¢ an acre. In the 29 year period between 1864 and 1893, many people bought and sold various portions of the 4,239 acre tract. Well known names such as Remi Nadeau, Dona Arcadia Bandini de (Abel) Searns, Robert Tweedy and John C. Downey appear in records.

In April of 1893, a man named Hinton sold 2,777 acres to Michael Cudahy, a meat packer from Chicago, for the price of $105.15 an acre. This land was originally known as the Nadeau Ranch, bounded by Florence Avenue on the north, Santa Fe on the West, Manchester on the south along the Heyman tract near Eastern and Florence Avenue.

Michael Cudahy (1841 to 1910) was an American industrialist. He was born in Ireland in 1841 and emigrated to the United States in 1849. He moved with his family to Milwaukee, Wisconsin and worked in the meat packing industry. With the help of his brother (Patrick Cudahy) he established the Armour-Cudahy meat packing plant in Omaha, Nebraska.

In 1908, Cudahy sold his share of the company and bought a 2,777 acre (11 kilometers squared (km²)) ranch east of Los Angeles. He subdivided the ranch and sold them as one acre (4,000 meters squared (m²)) lots. This area became incorporated in 1960 as the Cudahy, California.

Virtual Recreation
Report a Concern
Get a Permit
Agendas & Minutes